Just before Christmas I received a t-shirt. I like t-shirts so it was a welcome gift (after all at last count I have over 50 of them). However, this t-shirt was slightly special. It was one of 5000 that Threadless were forced to print and supply free to customers around the world to try and make us believe they could actually supply a decent t-shirt.

What a state of affairs. How on earth had a company that sells t-shirts come to the point that they had to give them away free to prove that they could make t-shirts?

So back to the beginning of the story. Threadless during the mid 2000s was once the epicentre of design cool. Beginning with a business model of democratising design, or in plain words, getting people to vote on user submitted designs. They would then print the most popular of those designs, sharing a portion of the proceeds with the designer. It was a ground breaking, crowd sourced model and they combined it with a light touch, humour and a bit of cool.

Designs poured in from round the globe. We all voted and the best were made. Because we voted on them, they were mostly ordered too. A brilliant business model, seemingly unstoppable. 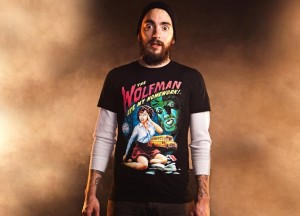 So what went wrong? Well, in a typical small to big business evolution, Threadless started to get greedy.
They wanted a bit more profit. To make higher profits, you can sell more products or increase your margins. Threadless appear to have chosen the option of greater margins by cutting costs – the costs of making t-shirts. And thus, over the years, the material involved in the Threadless t-shirt production must have changed at least 5 times. I know this as I have loads of them. Each time they got a little bit less material in them until just over a year ago when the shirt had morphed into a see-through piece of cloth barely resembling a shirt, but more the remnants of the shreddings of a boy-band-wallowing-in-the-surf-type shirt.

At this point people got cross. Really cross. I imagine the life of the poor person who answered Threadless emails wasn’t a lot of fun. First we were fobbed off with 10% off discounts for our next purchase, then refunds if we returned our goods (which if you are outside the USA is a difficult thing to do as you’d pay more in postage returning it than the item cost originally), and finally we received personal letters from the founder promising to do something about the quality of their goods.

Eventually six months after personal assurances by the boss, we received a free t-shirt from Threadless. It’s nice, fits pretty good and is made of cotton. Good one.

But what a state to get in. Having to print 5000 shirts and deliver them free around the world to convince your dedicated customers that you can be trusted to make t-shirts?!

Companies around the world seem to be hell bent on reducing costs and increasing margins.

We could blame the evil purchasing manager but someone in management is letting them getting away with this. Ultimately, though at what overall cost? The damage to reputation from policies like this is immense. The pursuit of lower and lower costs creates a vicious spiral to the bottom. How far removed from the original product and idea does something become before it is no longer what you set out to make? Threadless now know and it cost them dear.

The lesson here is costs are important, but quality, reputation and customers are more important. If it costs money to make your product or service but your customers value and trust you, then they will return for repeat buying. Margins may be pushed, but you can always increase your price, and explain to customers why. They are more likely to accept that than an inferior product.

Hi, we are Awemous, a marketing and design agency based in Thame, Oxfordshire.